THE DISPLACED Q: What’s the cheapest — yet tastiest — meal you’ve discovered on your world travels? 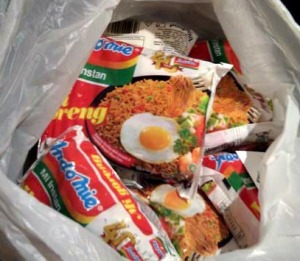 So what is the tastiest cheap-eat I’ve come across whilst traversing the globe? Not being much of a foodie, and being a writer, cheap — yet tasty — is what I’m all about.

Well, I hate to be boring and predictable — so I won’t be. Yeah, the street food you get in Thai markets is to die for when you’re hungry. Not only that but you can eat three full meals back to back for the price of a loaf of bread in Australia.

But that’s not what I’m going for. No, for sheer cheapness compared with mouth-watering deliciousness, I’m going to have to go with an old favorite: Indo Mi goreng, an instant-noodle brand produced by the world’s largest instant noodle manufacturer, located in Indonesia.

Not just any old noodles!

Now you could be forgiven for thinking I’ve gone off my rocker here. There are countless brands of instant noodles floating around out there, and they’re pretty much all unified by one thing: being rubbish.

But not these noodles! I ate them almost every day on my rejuvenating hike across Western Australia — mostly because they were light enough to carry in a full rucksack and impossible to mess up in terms of cooking. These ones are nice, super nice even. And when I went back to England recently and discovered I couldn’t buy them there, the wife made me order them wholesale! I think they came directly from Indonesia. Forty packet… Oh, yes, this is how much we love these noodles.

Even though we buy them in bulk, they still cost less than the postage!

All the Asians in my area of Australia buy them — either in ten-packs, or in the same giant box I had delivered to me in England. That’s how you know they’re good noodles — when your Malaysian housemates fill their shelves with them!

But I can’t devote this entire post to one brand of instant noodles, can I? Um…no. But I’m hard pressed to think of anything else that’s so delicious for less than 50 cents.

A case of “you get what you pay for”?

Any free meal is a good meal, you know?

Or did he? I’ve come across a few ways of getting free food in my time — from famous vegan soup kitchens in a hippie commune in Margaret River (Western Australia) to the delightful food they served me in hospital when I was selling my body to medical science (also know as being a guinea pig for medical testing). And none of these meals were especially delicious.

You know, they would shoot me full of weird, untested drugs, imprison me in a hospital for weeks at a time, make me sleep on rubber sheets and wake me every morning at 4:00 a.m. to take my blood.

But still, the worst thing about the whole experience was the food.

Free is only good if you don’t have to have it; being forced to eat isn’t great no matter the quality of the food. Which, unsurprisingly, wasn’t great.

Tastes that refuse to be acquired

Then, of course, there are the meals in foreign lands that people treat you to. In my experience, that can be risky.

On my last morning in South America, my Ecuadorian girlfriend took me for a surprise breakfast she’d been planning for some time.

She led me all through the suburbs of Quito, to a restaurant which was famous for one dish in particular: ceviche.

Now, I’m not a fan of seafood. I can just about choke down a fish-finger — as long as I can’t see the insides of it. Ugh!

Of course, this topic had never come up; one of the myriad disadvantages to starting a relationship when you don’t share even one common language. We communicated mostly in sign language, and the half-assed version of Spanish I was picking up.

So naturally, I’d never mentioned my intense dislike of seafood, in much the same way as she thought it would be too much effort to explain what her surprise was. As a result, neither of us knew what to expect until I lifted the lid on my service and saw what it was: namely, half the cast of Finding Nemo, after being put in a blender with some brown sauce and chillies…

I tried to eat it, honestly I did!

I didn’t succeed though.

At least, the bit I did eat came back up so rapidly we have to make our excuses and leave the restaurant at top speed…

So remember that, whilst free food is irresistible, you should always season your desire for a cheap eat with a little caution, especially when traveling. The old adage is true: there is no such thing as a free lunch (or breakfast).

There are few things worse than being violently ill in the middle of a country where no one speaks your language. Far from home. Far from healthcare you trust… And wearing most of your raw-seafood breakfast.

That is almost never a good look. :0)

So, that’s all from me on this particular displaced Q! Now it’s your turn! What experiences have you had in your search for cheap eats around the world? Any tasty morsels? Anything we should avoid? Any scrumptious stories…? We’d love to hear from you! You can also hit us up on Twitter: @TonyJamesSlater +/or @displacednation.

STAY TUNED for Tuesday’s post, the second part of a two-part travel yarn about two madcap Indonesian ladies who are taking Japan by storm!

Img: The contents of Tony James Slater’s shopping bag, taken on 9 September 2012 in his current home of Perth, Australia.

8 responses to “THE DISPLACED Q: What’s the cheapest — yet tastiest — meal you’ve discovered on your world travels?”