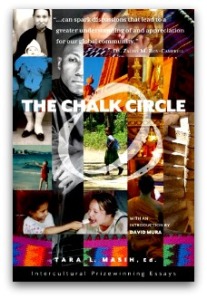 Tara L. Masih, a native of Long Island, N.Y., is the editor of The Rose Metal Press Field Guide to Writing Flash Fiction (a ForeWord Book of the Year) and The Chalk Circle: Intercultural Prizewinning Essays, and the author of Where the Dog Star Never Glows: Stories (a National Best Books Award finalist). She has published fiction, poetry, and essays in numerous anthologies and literary magazines (including Confrontation, Hayden’s Ferry Review, Natural Bridge,The Pedestal, Night Train, and The Caribbean Writer); and several limited edition illustrated chapbooks featuring her flash fiction have been published by The Feral Press. Awards for her work include first place in The Ledge Magazine‘s fiction contest and Pushcart Prize, Best New American Voices, and Best of the Web nominations.

Award-winning editor Tara L. Masih put out a call in 2007 for intercultural essays dealing with the subjects of  “culture, race, and a sense of place.” The prizewinners are gathered for the first time in a ground-breaking anthology that explores many facets of culture not previously found under one cover. The powerful, honest, thoughtful voices — Native American, African American, Asian, European, Jewish, White — speak daringly on topics not often discussed in the open, on subjects such as racism, anti-Semitism, war, self-identity, gender, societal expectations.

I’ll be honest: anthologies are not what I head for when I enter a bookshop. My gripe is that the tales are too short, and that just as you are getting into the swing of a story, it ends.

This collection of real-life snapshots, on the other hand, is different. Like most other writers, I have an addiction to people-watching and surreptitious eavesdropping, so an anthology of confessions on multicultural issues, by prize-winning writers, is right up my alley.

Because of the book’s broad topic of “culture, race, and a sense of place,” the essay subjects range widely, as each writer offers his or her own perspective on the topic. Not all of the pieces are about living abroad in another country. One such essay, which also struck me as the most poignant, was “A Dash of Pepper in the Snow,” by Samuel Autman. An African-American who grew up in an all-black neighbourhood of St. Louis, Missouri, Autman became the first black reporter for the Salt Lake Tribune in Utah during the early 1990s. His recollections of that time show, clearly, that one does not need to cross oceans to feel like a fish out of water in the worst possible way.

The essay that will probably strike the loudest chord with TDN readers is “Fragments: Finding Center,” by Sarah J. Stoner. An American-born writer who, until the age of 18, had never lived in the country of her passport but had grown up in Uganda, Morocco, Belgium, and Thailand, Stoner writes of her first days at college. This pivotal life experience also coincided with her first days of living in America, a country she can technically call “home” but which feels like anything but:

A pronounced British accent or status as an exchange student would work wonders for me in this moment. But my bland and unremarkable exterior offers no such grace. I appear deceptively American.

Because everyone’s experiences are unique, different essays will appeal to different readers. A solitary person myself, I was fascinated by “Connections,” by Betty Jo Goddard, in which the 78-year-old writer describes her isolated existence in Alaska, and her feelings about using modern technology to stay connected to the world.

Everyone, though, will be touched by “Tightrope Across the Abyss,” by Shanti Elke Bannwart, a woman born in Germany at the start of World War II. In this piece, Bannwart tells the story of her neighbor, Bettina Goering. Goering is the great-niece of Herman Göring, right-hand man of Adolf Hitler, who swallowed cyanide two hours before he was due to be hanged at Nuremberg. Her  struggles to reconcile herself with her Nazi ancestry have already been documented in the film Bloodlines, where she “seeks redemption by facing Holocaust survivor and artist Ruth Rich in Sidney, Australia.” Bannwart, with her own 70-year burden of having a Nazi father decorated by Hitler, meets her neighbor Goering, and in doing so finds the nugget of peace and self-forgiveness that has evaded her for so long.

On the convenience of the label “TCK”:

I was relieved to finally have a shortened version of, “Well, I am American but I never lived in America until college. I went to high school in Thailand and before that I lived in Belgium and then Morocco before that. Yes, I was born in the U.S., but we left for Uganda when I was seventeen days old.”

On getting to know a place:

Places are best soaked in through the tongue, sent stomach-ward, digested and incorporated into the body. To know a place is to visit local markets, order things with unpronounceable names, and eat street food no matter the time of day.

(From “Assailing Otherness” by Katrina Grigg-Saito)

On using technology to stay in touch:

Such connections [phone and email]…are available even to “hermits” living on a ridge-top at the end of nowhere. Are they needed? No. But they enrich my life. My life is full of potential connections.

(From “Connections,” by Betty Jo Goddard)

Although this anthology of autobiographical experiences is a slight departure from the usual books we review at Displaced Nation, it’s a valuable and high quality addition to our stable of “displaced reading.” The sheer variety of experiences depicted in the book means that all readers, wherever they hale from and wherever they are at present, will find something that resonates.

“The Chalk Circle” can be purchased here.

STAY TUNED for Thursday’s trip to Woodhaven, where Libby is feeling more and more like an exhibit on  the Jerry Springer Show.