THE DISPLACED Q: What fashion souvenirs find their way into your rucksack? (Or: Fashion for the Illiterati) 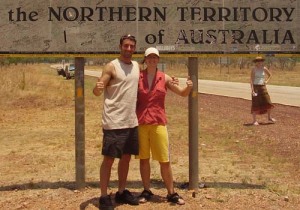 So one of this month’s themes is… Fashion!

I don’t know much about fashion – at all in fact! That’s one of the main reasons I emigrated to Australia, where there are exactly two options for guys; shorts and a vest top,  or a sleeveless t-shirt and ‘boardies’. (And yes, for those of you who don’t get the lingo – those are the same outfit.

However, I do travel with clothes – even if I don’t get to wear very many of them. I’ve got a few key ‘essentials’ that I never leave home without. Not because America’s Next Top Model instructed me to always have them with me in case of an emergency photo shoot (though this does factor heavily in my decision about what make-up to carry), but for one particular reason: they are my souvenirs.

Souvenirs should be useful…

Some people collect magnets. My sister had a thing for sew-on patches once; she bought one in every city and tourist attraction she visited. She filled two bed sheets with the things. The only problem, from my perspective, was this: I travel more or less constantly. While it would be great to tuck myself into bed each night with all the mementos of my travels, it just isn’t practical to carry something like that around. The same  goes for magnets – much as I wish my rucksack was a fridge (and ideally was well stocked with bottles of crisp English cider), it isn’t. I’ve never even owned a fridge. (That was my call for sympathy! What, no takers? Ah well.)

What I mean is, if you want to carry your souvenirs with you as you travel, they really have to earn their place in your rucksack. This is why I chose clothing as the ideal collectible! It’s useful – well, perhaps the grass skirts from Bali have fairly limited potential, but the rest is pretty handy; it’s light; and I’d have to have a bag full of clothes with me anyway. Might as well give them some significance.

…and tell a story

So whenever I go out I can usually tell a fistful of travel stories based solely on what I’m wearing. Jeans from Thailand – cost less than a loaf of bread in Australia, but as I’m a bit bigger than the average Thai, they’re tight in some… interesting places.

I have a technical t-shirt, one of those expensive trekking type ones – only this one is covered in sponsor’s logos. I was given it as a thank-you by the organisers of the very first ‘Rat Race’ – an adventure race in England, where teams of contestants run, canoe, bike, climb and problem solve their way around a major UK city each year. I didn’t compete in the Rat Race, because I have no friends. (Ahhhh…! No?) But I DID dress up in a giant fur rat suit – and roller-skates – and skated around Bristol city centre for a week, trying to draw attention to the race. Oh, and I did a bungee jump in the same outfit (but that was an accident and was entirely due to the cavernous size of my mouth). I LOVE that t-shirt – I wear to the gym at least once a week, and every time I put it on I remember that bungee jump. Even the memory of it loosens my bowels.

…and keep you toasty in Australian summers

I have a fleece jacket I ‘forgot’ to return after finishing my contract as a ski lift operator in New Zealand – while I was working there I wore four complete layers, and this was one of the middle ones. It is so warm that at any altitude less than a thousand meters I can only wear it for a few minutes, before I start to leak profusely from every part of my body. I have it with me now, but it doesn’t come out of the bag much – it’s 39 degrees centigrade here in Perth at the moment – that’s 102 F!

I also have a bright red Gore-Tex jacket which I got in England – no, wait! There’s a story, I promise! See, I bought one similar just before setting off on my first Grand Voyage Around The World™. You know – the one where I only got as far as France.  The jacket had been a birthday present, but I’d never needed it to repel water – just insects. One fine afternoon, hiking without direction or purpose, I sat on a strange wooden structure to take a rest.

Now, in hindsight, any strange wooden structure in the middle of a field is bound to be a beehive – but I was young and… stupid. Okay, stupider.

The bees swarmed to the attack and I fled across the field – to safety, I thought. One tenacious little devil wasn’t giving up though. He dived at me as I tried to climb the stone boundary wall. For the first time in my life I was faster than something – I lashed out with the Gore-tex jacket, catching the bee mid-air and dashing him against the wall. Two things died in that moment; my insect assailant, and my jacket. The zipper hit the stone wall squarely and disintegrated, leaving me with a 100% waterproof jacket that was impossible to fasten. Which meant that when the inevitable downpour came a day later, I got soaked in a wide stripe from neck to navel. I gave up and went home soon afterwards; not because of the jacket, but because I was terrified of being locked in a prune furnace and roasted alive by my boss, a plum farmer in Bordeaux (long story).

I put in an insurance claim for the jacket, saying it had been damaged in transit, then I returned it to the shop as defective. Between the store credit and the insurance pay-out I was able to buy a much better jacket – and I carry it with me to this day. In the last ten years I have never once tried to use it to kill anything – I’ve learnt my Karmic lesson!

So, this is where I open the floor to you lovely people!
Have you got a favourite bit of clothing you travel with?
A special shirt you can’t leave home without?
Or a bit of gear with a story behind it…? Share, please, we’d love to hear about it!
You know the drill – do it in the comments  :0)

8 responses to “THE DISPLACED Q: What fashion souvenirs find their way into your rucksack? (Or: Fashion for the Illiterati)”