Mia Wasikowska — a Third Culture Kid who is no Cinderella 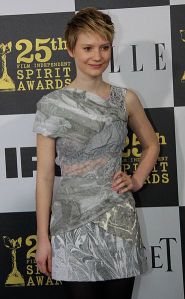 Neatly coinciding with The Displaced Nation’s recent themes of the Royal Wedding and Gothic Tales, Maureen Dowd in her New York Times article “Who Married Up: The Women or the Men?” compares Cinderella with Kate Middleton and Charlotte Bronte’s Jane Eyre.

While the comparison with Kate Middleton is oft-cited, Bronte’s tale is less obvious: the story of a society misfit Plain Jane who suffers a series of gothic melodramas before finally claiming her maimed prince – but on her own terms. It’s possible that at some point during her ten-year waiting game in which Prince William apparently called all the shots, Kate Middleton may have sympathized with Jane Eyre’s wistful statement in the latest adaptation of Bronte’s novel:

“I wish a woman could have action in her life, like a man.”

A shooting star who needs no wishes

Mia Wasikowska, who stars in the title role of Cary Fukunaga’s “Jane Eyre,” needs no such wishful thinking. The 21-year-old Australian had her first US TV role at 17, was named the following year as one of  Variety magazine’s Top Ten Actors To Watch, and won the 2010 Hollywood Film Festival Award for Best Breakthrough Actress. Until “Jane Eyre” came along, she was best known for her portrayal of Tim Burton’s Alice in Wonderland.

While it is hard to imagine two female characters more different than Jane Eyre and Alice,  they do share some similarities:  Jane’s feeling of exile, of being shunned by society, is echoed in Burton’s Alice. In an interview with Australian Harper’s Bazaar, Wasikowska spoke of her interpretation of the role:

“Alice has a certain discomfort within herself, within society and among her peers. I feel similarly, or have definitely felt similarly, about all of those things, so I could really understand her not quite fitting in.”

Although Ms. Wasikowska  does not elaborate about her own feelings of displacement — and certainly most young women feel insecure at some time or other —  one can’t help wondering if she is referring to travel experiences in her childhood and teens.

A TCK in Tinseltown

The daughter of an Australian father and Polish-born mother, Wasikowska is a TCK (Third Culture Kid.) She was born and raised in Canberra, Australia, and when she was eight years old the family moved to Szczecin, Poland, for a year, during which time they also traveled in France, Germany and  Russia.  At 17, she was cast in the role of Sophie in HBO’s “In Treatment,” which necessitated a move to Los Angeles.

One could argue that anyone, of any nationality, who is flung into the Hollywood carnival at such a tender age could qualify for the label of TCK.

The US Department of State defines Third Culture Kids as:

“those who have spent some of their growing up years in a foreign country and experience a sense of not belonging to their passport country when they return to it…they are often considered an oddity [and] what third culture kids want most is to be accepted as the individuals they are.”

It would be nice to think that, despite governmental gloom, TCK experiences played a part in Wasikowska’s professional development and rocketing career.

Home is where reality is

Canberra is still Wasikowska’s home, however, and she lives there with her family between film projects. When asked by PopEater if she was treated like a celebrity at home, she answered:

“I still take the rubbish out and empty the dishwasher. It’s good going back for that reason.”

Well, that’s OK. After all, Kate Middleton said she intended to cook dinner for Prince William when they married.

And I expect even Cinderella swept a few floors in her new castle.

If you enjoyed this post, we invite you to subscribe for email delivery of The Displaced Nation. That way, you won’t miss a single issue.