3 Comments Posted by The Displaced Nation Team on October 15, 2015 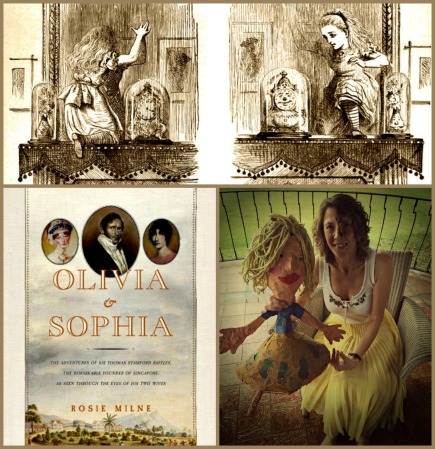 Alice goes through the looking glass, illustration by John Tenniel, uploaded to Flickr by Central Asian (CC BY 2.0); book cover art; Rosie Milne in Singapore with her papier-mâché Alice (supplied).

Welcome back to the Displaced Nation’s Wonderlanded series, being held in gratitude for Lewis Carroll’s Alice’s Adventures in Wonderland, which turns 150 this year and, despite this advanced age, continues to stimulate and reassure many of us who have chosen to lead international, displaced, “through the looking glass” lives.


This month we travel
d
o
w
n
the hole with Rosie Milne, an Englishwoman who has lived in various places, mostly within Asia, but right now can be found in Singapore.

I first discovered Rosie Milne through an article she worte for Telegraph Expat about romantic novelists who’ve been inspired by their expat surroundings. I noticed in her bio blurb that she runs the Asian Books Blog.

Then recently I had the pleasure of her getting in touch with me to feature a description of the Displaced Nation for the Blog’s Sunday Post.

As Rosie and I began backing and forthing by email, I spontaneously decided it might be fun to be wonderlanded with her.

Now, having spent many years living in Asia myself, Singapore, where Rosie lives now, isn’t exactly my idea of wonderland. I know it comes out tops for expat destinations on various surveys, but for me Singapore is a nice place to visit (great food and shopping) but for living? Much too safe and predictable; Asia Lite.

But Rosie has lived all over Asia, including in my former home of Tokyo (Asia Heavy!). She has also thought deeply about what it’s like for women to “pass through the looking glass” into Asia, having just completed a novel, Olivia and Sophia: a fictionalized account of the adventures of Sir Thomas Stamford Raffles, the founder of Singapore, as seen through the eyes of his first and second wives. (It’s due out in November from Monsoon Books.)

We’ll get to read a couple of excerpts from that work in the next post, but first let’s find out what it’s like to be wonderlanded with Rosie!

Rosie Milne: Thank you, ML, and greetings, Displaced Nation readers. To give you a little more of my background: I was born in London. I worked in publishing there before moving to New York, where I wrote my first novel, How To Change Your Life, about an editor of self-help books trying to follow the advice in a self-help book.

I then moved to Hong Kong where I wrote my second novel, Holding the Baby, about four sisters with differing attitudes to motherhood—one of them, unable to have biological children, adopts from China.

I then had short spells in Sydney and Tokyo, before moving to my current home, Singapore, where I wrote my new novel, Olivia & Sophia, which features two early forerunners of a type of modern expat woman: the trailing spouse.

In Tokyo language was impenetrable—I did try to learn, but more-or-less never got beyond being able to give my address. There was a big earthquake within a few days of my arrival. There were young adults on the streets dressed as cartoonish characters. I had my first, and last, taste of sashimi chicken – the most revolting food I ever tasted…. 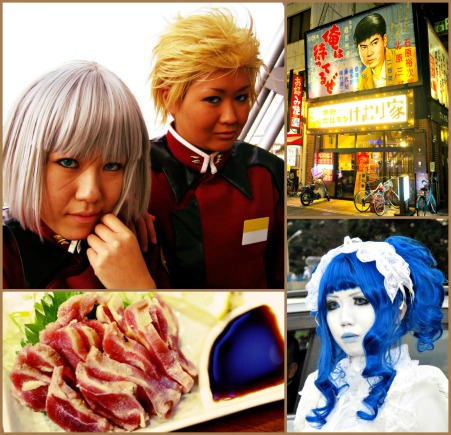 “Consider anything, only don’t cry!” said the Queen.

I think expats, amongst the luckiest people on the planet, should resist succumbing to pools of tears.

I am quite often wary about fish, but usually, when I try the dish, or fish, in question, I enjoy it.

I would serve vodka and gherkins. As to the guest list…how about Jesus, and Richard Dawkins. The Buddha and Darwin. The Ayatollah Khomeini and Einstein…should make for interesting conversation, although language might be a bit of a problem.

“Then it doesn’t matter which way you go,” said the Cat.

I am terrible at giving advice.

If I hadn’t lived in Singapore I doubt I’d have written Olivia & Sophia—an account of the life of Sir Thomas Stamford Raffles, the founder of Singapore, told through the fictionalised diaries of his two wives. Olivia & Sophia predate Alice, but they must often have felt wonderlanded. In an era when the voyage from Europe to Asia took anything up to ten months, when letters were the only means of communication with Home, when Europeans died like flies in the East, their sojourns abroad saw them fall down the rabbit hole far more comprehensively than any modern expat. I hoped to use the novel to explore parallels between an early age of globalisation, and our own age, between the effects of a financial crisis then, and of the recent crises in the global economy, between the lives of expats then, and expats now, and so on…

Why not make Alice Japanese? She could cultivate kawaii. And the white rabbit could be kawaii, too. The setting could be Tokyo, the rabbit hole could be the Tokyo subway…

Photo credits: Tumbling down the rabbit hole…, by LuxTonnerre via Flickr (CC BY 2.0); Pink bunny-shaped roadblock (Narita) via Wikimedia Commons (CC0 1.0). Inset: Through the Rabbit Hole, by Jenni C via Flickr (CC BY-SA 2.0).

Thank you, Rosie! Being wonderlanded with you was a curious experience, that’s for sure! Readers, please leave your responses to Rosie’s story in the comments. And stay tuned for her writing samples showing what it was like to be wonderlanded back in the day of Sir Stamford Raffles! ~ML

STAY TUNED for the next fab post: an example of how Rosie writes about a wonderlanded experience.

Wonderlanded (series) Acquired tastes, Alice in Wonderland, It's Fiction!, It's Food!, Japan, London, New York City, Singapore, Strange sightings, Tokyo, Trailing spouse, Travel yarn, UK, Wonderlanded
← For this peripatetic Sardinian writer who has settled down (for now) in Rome, a picture says… WONDERLANDED: Will I have a hard or a soft landing?—two excerpts from “Olivia and Sophia,” by expat novelist Rosie Milne →