DIARY OF AN EXPAT WRITER: After the hard slog of producing second book in series, the rush that comes with boost to sales

Last month, I told you all about my writing process—all the work that goes into a book before it ever shows up in an editor’s inbox. It’s a slow process requiring perseverance and many hours sitting in a chair every day. And then there’s copyediting, formatting, and a final proofread, after which I finally hit publish.

That’s when things get interesting.

This month, I would even say amazing.

But we’ll get to that. First, let me refresh your memory on where we are. Diary, as you will recall from previous entries, I’ve been writing my post-apocalyptic series, the Seabound Chronicles, under my Jordan Rivet pen name for two-and-a-half years now. The first book, Seabound, came out in November. Sales have been modest, with complimentary reviews but rankings that won’t set the world on fire.

My intention has always been to put out Book Two before doing bigger promotions and (hopefully) seeing bigger results. With the publication of the sequel, Seaswept, at the beginning of this month, I finally had the chance to set that plan in motion. 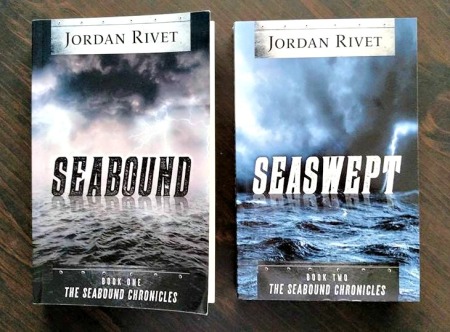 Jordan Rivet’s Seabound Chronicles is now a real series, with the publication of Book Two, Seaswept, earlier this month.

Here’s how it went down. When I released the second installment in the series, it generated sales and a bit of attention for the first book. A few days after Seaswept came out, I put Seabound on sale for $0.99 and advertised it with a couple of book recommendation sites.

My hopes were high, especially as soon I’ll need to decide whether or not to get a new day job. Displaced Diary, as you’ve been following my expat writer journey for a while, you’ll know my big goal is to make a full-time living as a writer, and I’ve been working hard under my own name and a pen name to achieve this. But my savings are running low, and Hong Kong isn’t exactly famous for its low cost of living.

The sale on Seabound lasted five days. For the first two, I booked smaller promo sites—some free, some charging a few dollars for the ads. The sales were similarly modest: 10 on day one and 14 on day two.

To be honest, I was disheartened. Even though these results were consistent with the reach of the smaller promotional sites, I’d hoped for more. If I couldn’t get the ball rolling with multiple books out, maybe it was time to polish up my CV. Failure would mean going back to teaching or hoping for a job opening in Hong Kong’s tiny publishing industry.

For those two days I felt . . . underwhelmed. I dug into the draft of another book to keep from obsessing over my sales graphs, but found myself clicking over at least once an hour anyway. More often than not, nothing had changed.

On the third day…

It was time to bring in the big guns. I’d booked ads on such sites as eReader News Today, Free Kindle Books and Tips, and BookSends. These sites were supposed to get my discounted title in front of tens of thousands of additional readers. And some of those readers decided to buy.

On Day Three, I woke early to over 60 sales. It was already my best sales day ever, and I hadn’t even had my coffee. I spent most of the day glued to my computer, watching the spike tick upward. The numbers climbed and climbed, finishing with a three-digit total.

Throughout the weekend of the promotion, I refreshed my sales dashboard regularly. For three straight mornings I woke to sales multiple times better than my previous best day.

I had scheduled lunches with friends and spent Sunday afternoon on a boat—but snuck off to the restroom to check my ranking every chance I got. Seabound reached the top 1,800 overall in the Kindle store and ranked in the highly competitive Dystopian and Post-Apocalyptic categories for the first time. It even took the #1 spot in Sea Adventures for a little while.

My angst of the previous days was starting to look a bit silly.

High apple pie in the sky…sales!

It turns out it’s a real rush to see my books climbing the rankings. I experienced a bit of this when my Kindle Single, Pay Off launched with prime placement on Amazon, but sales of the Seabound Chronicles have now surpassed those of the Single. My goal of making a living off my Jordan Rivet pen name feels more and more possible.

The promo has ended but the sales haven’t. This has been the best month of my career. In fact, it has been so good that May sales of Seabound and Seaswept, are double the Seabound sales for the previous six months, and we still have a week to go. I’ll be able to press on to the summer before making any decisions about new jobs or new careers.

A writer’s “One Percent”

Next month I’m going to see a different set of results, when my traditionally published travel memoir launches worldwide and in e-book (it has been out in Hong Kong since November). This is the very first book I ever sat down to write, so I’m proud that it’ll finally be out in the world. But I’m also proud that I’ve taken what I’ve learned and kept writing. I’m sitting down to start the fourth draft of the Seabound prequel right now.

And so it goes.

Thanks for enjoying this 1 percent event with me as well cheering me on through the 99 percent days, Displaced Diary.

Here’s to many more Mays for us both!

Readers, it’s encouraging to hear that light can be at the end of the expat writer’s tunnel. Any words of congratulations for Shannon, thoughts on this recent sales experience, or questions for her on marketing techniques, please leave in the comments. And be sure to do so soon, before she gets swept up in the excitement of her memoir coming out next month!

6 responses to “DIARY OF AN EXPAT WRITER: After the hard slog of producing second book in series, the rush that comes with boost to sales”