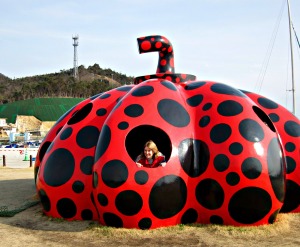 Place of birth: Grand Haven, Michigan, a charming tourist town on the shores of Lake Michigan.
Passport: USA
Overseas history: France (Avignon): 1985; Japan (various towns + now Aizumi, Tokushima Prefecture, Shikoku Island): 1988 – present.
Occupation: Author* and TEFL teacher
Cyberspace coordinates: Suzanne Kamata (author site); @shikokusue (Twitter handle)
*Suzanne Kamata is the author of a novel, Losing Kei; a short story anthology, The Beautiful One Has Come (listed on The Displaced Nation’s top books for, by and about expats in 2011); and a picture book, Playing for Papa — all of which concern bicultural relationships and/or families. She is the editor of several anthologies — the most recent being Call Me Okaasan: Adventures in Multicultural Mothering.

What made you leave your homeland in the first place?
A sense of adventure! I wanted to see the world, which I’d glimpsed through reading novels set in other countries, and I wanted to gather up interesting, exotic experiences for the stories and books I would one day write.

Toward the end of my college career, I planned on going into the Peace Corps to teach English in Cameroon. As a fallback, my brother suggested a new program he’d read about in the newspaper. The Japanese government had set up the Japan Exchange and Teaching (JET) Programme to get native English speakers into public schools. I’d studied Asian history in college, and had an interest in Japan (especially the Heian Age, when nobles communicated via poetry), so I applied. After rigorous interviews for both, I was accepted into both the Peace Corps and the JET Program. I decided to go to Japan first, because the JET Program was a one-year program. I figured I’d do a two-year stint in the Peace Corps later, but then I wound up meeting a Japanese guy…

Is anyone else in your immediate family “displaced”?
My brother spent a year in Germany as an exchange student during high school. I think I was influenced a bit by his experience.

You’ve lived in Japan for a long time. Does any one moment stand out as your “most displaced”?
When I was about to give birth to my twins via C-section. My mother and father were on the other side of the world, and my husband was out in the waiting room. I was surrounded by Japanese-speaking strangers. I wondered if I would be able to remember how to speak Japanese during the operation. I think entering motherhood is like going into another country for everyone, but it’s especially surreal in a foreign hospital.

Is there any particular moment that stands out as your “least displaced”?
No one moment but all the moments when I’m with my children. Whenever I spend time with them, I feel completely at home. My children have never lived in my native country, and they have Japanese passports. When I’m away from them I feel a little bit lost.

Do your kids ever go to the United States for visits?
My kids have been to the States numerous times. Most recently, my son went on a school trip to Hawaii, where, for once in his life, he blended in perfectly. There are many mixed race kids in Hawaii. I think my kids feel pretty comfortable in the States, but being on vacation is different from actually living there.

You may bring one curiosity you’ve collected from your adopted country into The Displaced Nation. What’s in your suitcase?
A furoshiki — a Japanese wrapping cloth — dyed with locally grown indigo. It will be easy to tuck into my suitcase, and I’m sure I’ll find ways to use it during my stay at The Displaced Nation. In Japan, I use wrapping cloths to carry books, covered dishes, and oddly shaped parcels. They’re durable and more attractive and ecological than paper or plastic bags. The color will remind me of the area where I’ve lived for over twenty years. The name of the town where I now live is Aizumi, which means “indigo dwelling place.”

You are invited to prepare one meal based on your travels for other members of The Displaced Nation. What’s on your menu?
Starter: A few slices of sea bream sashimi from the straits of Naruto, with a squeeze of sudachi and soy sauce mixed with wasabi on the side for dipping.
Main course: Cubes of grilled Kobe beef strewn with fresh herbs (julienned shiso leaves, coriander, parsley, slivers of ginger root), steamed barley and rice, and miso soup made with fresh wakame — served with a nice Côtes du Rhône wine.
Dessert: Sudachi pie (my own creation: it’s Key lime pie made with sudachi juice instead of lime), served with espresso. I’d also put a plate of sliced Asian pears on the table.

And now you may add a word or expression from the country where you live in to The Displaced Nation argot. What will you loan us?
I like the Japanese word natsukashii, which refers to nostalgia or a longing for things of the past. I don’t think there’s a perfect equivalent in English. At any rate, Americans don’t go around saying “I’m feeling nostalgic!” whereas natsukashii is frequently used in Japan. If someone brings up a memory from the past, another person, filled with nostalgia, might say, “Natsukashii!”

Today, appropriately enough, is “East Meets West Day.” can you tell us about any parties or celebrations you’ve held since you becoming displaced from your native land, that in some way illustrate this theme?
In Japan, only children’s birthdays are celebrated, usually with a store-bought cake. In our family, everyone, including the adults, gets a birthday party. Typically, we have a meal with celebratory dishes such as rice with red beans, or everybody’s favorite sushi, with a homemade birthday cake for dessert. We sing “Happy Birthday to You” in English, and the birthday person makes a wish before blowing out the candles on the cake. (The Japanese have adopted the custom of candles on a child’s birthday cake, but not the making of wishes.)

The Displaced Nation has just turned one year old. Can you give us some advice on themes to cover in our second year — anything you think should be on our radar?
You might consider interviewing Edward Sumoto, who runs a variety of events for Mixed Race/Third Culture individuals in Japan, and the filmmakers/photograhers/writers involved in the Hafu Project. I believe their long-awaited documentary will debut this year.

Readers — yay or nay for letting Suzanne Kamata into The Displaced Nation? Tell us your reasons. (Note: It’s fine to vote “nay” as long as you couch your reasoning in terms we all — including Suzanne — find amusing!)

STAY TUNED for a diversion from the usual updates from life in Woodhaven. In tomorrow’s post, Kate Allison will be reporting on her latest meeting with Libby. (What, not keeping up with Libby? Read the first three episodes of her expat adventures.)

img: Suzanne Kamata standing inside a pumpkin sculpture on the Japanese island of Naoshima (March 2011). The sculpture was created by the well-known artist Yayoi Kusama, who was herself an expat for awhile. (She lived in New York City in the 1960s.)